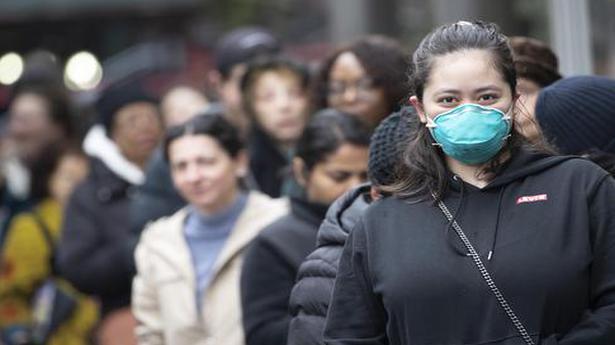 Even as a 68-year-old woman in Delhi became India’s second victim of coronavirus, a national emergency was declared in the United States on Friday over the fast spreading coronavirus to free up $50 billion in federal aid. Mr. Trump also said he would “most likely” be tested for the virus himself soon after facing possible exposure.

Meanwhile, with the second death and more than 80 positive cases of COVID-19, India has launched a containment lockdown, according to experts, with several States closing schools, colleges and theatres and cancelling public events.

The country, which is in the second stage of transmission, recorded the second fatality in the national capital. Health officials confirmed that the Delhi resident, who came in contact with her COVID-19 positive son, died at RML Hospital on March 13 night.

We have been covering the developments related to the coronavirus pandemic as it unfolded. Here are answers from experts on your queries about the virus, and a map of confirmed cases in India.

Here are the latest updates:

Argentina announced its second coronavirus-related death on Friday as Ecuador reported its first, taking the total death toll in Latin America to five as the virus shows signs of spreading rapidly.

Venezuela, Uruguay, Guatemala and Suriname reported their first cases of the COVID-19 pandemic.

Canada shut down Parliament and advised against all non-essential travel outside the country while Prime Minister Justin Trudeau governed remotely from his home, in self-imposed quarantine after his wife tested positive for the new coronavirus.

The Canadian government is advising the cancellation of all large events like concerts. Transport Minister Marc Garneau said cruise ships with more than 500 people will not be able to dock in Canada until July 1.

Overseas flights returning to Canada will also be restricted to a small number of airports in the country.

Canada’s House of Commons voted to shut down for at least five weeks to help ensure lawmakers do not contribute to the spread of the virus.

The moves came a day after Mr. Trudeau’s wife tested positive. The Prime Minister himself has been in self-imposed quarantine.

The mayor of the city of Miami has tested positive for the new coronavirus after meeting with a Brazilian senior official who was also in close proximity to President Donald Trump.

Mayor Francis Suarez said in a Friday statement that he was not feeling any symptoms and advised anyone who shook hands with him or was close to him since Monday to self-isolate for 14 days.

Florida politicians such as US Sen. Rick Scott had expressed concerns about coming into contact with the Brazilian president’s press secretary Fabio Wajngarten, who tested positive after joining Bolsonaro in a visit to Trump’s Mar-a-Lago estate last weekend.

As of Friday afternoon, Florida tallied 45 people in the state testing positive for COVID19, ranging in age from 25 to 83, the state health department announced. Two of them have died. Most appear to be travel-related but in more than a dozen cases, the route of infection was not immediately clear.

The Jaipur Foot’s US chapter has deferred a mega camp in Patna to provide the needy artificial limbs in view of travel restrictions and precautionary measures implemented by the government of India to combat the novel coronavirus.

Hundreds of differently-abled people from in and around the Bihar capital were slated to get artificial limbs and other equipment at the April 14 camp, which was being organised to mark the 129th birth anniversary of Dr B.R. Ambedkar.

“This is a pragmatic decision. We’re very saddened to cancel, but in remembering such a terrible tragedy, we shouldn’t create the risk of further harm being done,” Ms. Ardern said Saturday. Read more

(With inputs from agencies)

On Sunday, light lamps, candles for 9 minutes from 9 pm: PM

Coronavirus fight: White House health advisor Fauci says we may never get back to...

Health Newsresults.in - April 7, 2020
0
Director of the National Institute of Allergy and Infectious Diseases Anthony Fauci speaks during the daily briefing on the novel coronavirus, COVID-19, in...